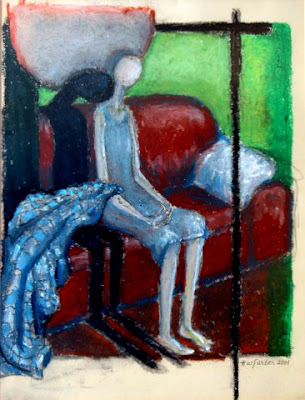 
My mother suffered from Alzheimer's, which began in her late seventies. I brought her to live with us in our small, then vacation, house. (Since remodeling it's now our permanent home.) After Dad's death, Mom never slept in a bed but was comfortable on a sofa. Each night I'd set up the sofa with sheets and pillows; she'd ask, "Where should I put my head?" I'd pat the pillow; she'd lie down the opposite way and complain about the light in her eyes. Then she'd switch ends. She tried so hard to do things the right way--even laid sheets of typing paper down to mark a path to the bathroom; yet she couldn't find it without help. There were times, though, when her humor returned and there was laughter in the house. Restaurants were fun, too, but she insisted that we be in the house when darkness arrived--nighttime porch-sitting was not allowed. No one in the house got much sleep.

This was my first oil pastel (drugstore variety) on drawing paper; done after Mom moved to an assisted living facility--it was completed in one all-night session; it still makes me cry. I tried to make a large painting of this--it was a failure; all the feeling went into this one.

My mother died in a nursing home seven years ago at age 82. I think of her almost every day, not just on Mother's Day.
Posted by hw (hallie) farber at 10:12 PM