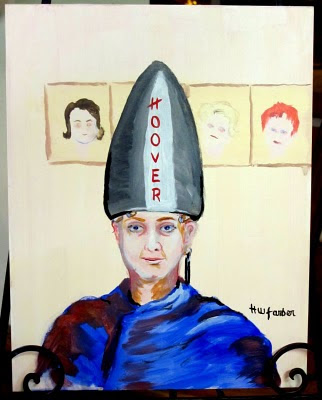 Untitled, acrylic on panel, 14x11
I know--my paintings always have titles (this looks a bit like Boy George or the redhead from Mad Men).  Those curlicues are part of the easel.
I'm a member of the Convergence Art Guild in Halifax VA.  On Thursday evening, the Halifax Chamber of Commerce and guests converged on the Guild and I was one of, I believe, ten artists who agreed to paint or draw something in just one hour; followed by a silent auction with proceeds going to the Guild.  During my 25-mile drive to the Guild I made the decision of what to paint--on Sunday I had seen a large floor model bullet-shaped chrome hair dryer at an estate sale; probably a 1950's model.  I didn't buy it ($50), I didn't photograph it, and I couldn't find it on Google--I remembered the shape and "Hoover."  Members and guests of the Chamber thought I might be painting the Pope (I thought of Sir Frances Bacon; others thought it might be a Bishop).  At 7 p.m. I signed the painting--larger than normal--and thought I'd be bringing it home where I'd follow Celeste Bergin's example--I'd sand it off and repaint.
Wrong!  All the paintings sold.  The owner of this one is the Town Manager of Halifax, Carl Espy--young and handsome.  I was okay with the sale during most of my drive home.  Then it hit me--do I really want people to see this?  Can I ask Mr. Espy to attach a note to the painting explaining that it was done in one hour?  I think I have a plan.  There is a group show coming up next month.  I like the concept of this painting; with no audience and a bit more time I can paint a better version. And, with a bit more money, Mr. Espy can trade in this version for a new improved model!
It was an enjoyable evening.  The other artists produced good work; they were:  Don Bagwell, Peggy Blount, Maxine Dunninger, Dianne Hills, Nelly Z. Jones, Ron Miller, Rebecca Rodgers, Steve Schopen (who finished two), and I'm missing a name.  Had I been smart I would have gotten a bidder's number and brought some of those pieces home to Clarksville; I'm not sure that was allowed.  (I have photos of the other works but failed to get permission to include them on my blog.)

Drawing What I See 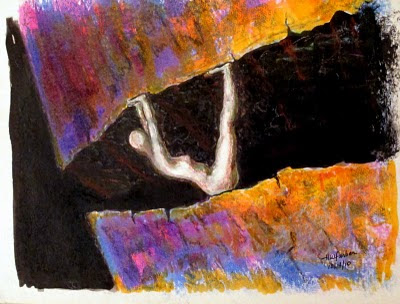 The Only Way Out is Down
acrylic ink, mixed media on Carte d'Art, 9x12
Sometimes, when I close my eyes, I see a painting......an image......a tv screen......a slide show.  I can recall the image(s) by closing my eyes again (I've done this my whole life).  These images appear with no accompanying thoughts.  I do think about them afterwards.  This one appeared several days ago and I decided to copy it onto paper (an aerial view).  I don't feel stuck; I'm not depressed; I don't think I'm seeing the future, or the past, or the now.
Does anyone else get this channel?
Posted by hw (hallie) farber at 9:02 PM 26 comments: 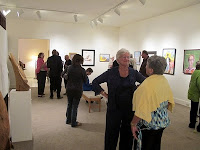 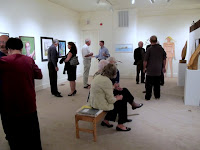 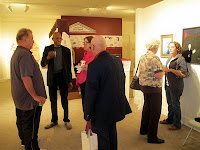 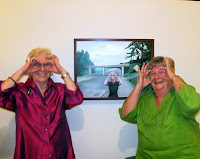 Thanks to everyone who came out and made this a great evening--even the weather was perfect.  My brother Bob and my sister-in-law Mary (former owners of a gallery in Pasadena) brought a bit of California to SOVA--a great combination. Yall should have been here. 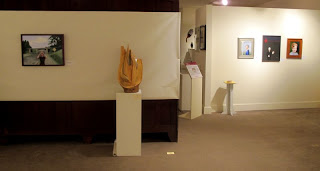 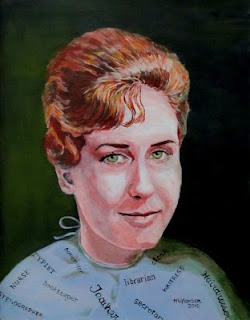