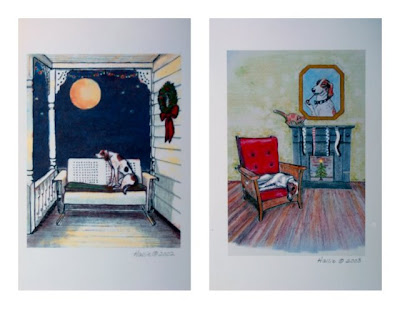 Hunting is popular here in southern Virginia and many hunters take great care of their dogs. Some, however, leave their dogs behind when the season is over; some dogs who don't perform well or are injured are simply abandoned. That's how I found Elvis--or Elvis found me. In 1999 there was no local SPCA and no leash law when I saw Elvis limping down our main street. When he showed up on my side of town, I offered a piece of chicken and a front porch glider with a blanket--he shyly accepted. When my neighbor (who has since moved) said she was calling the dog catcher, I adopted him, sent out announcements, took him to the vet for shots (the limp was due to a broken leg that had not been set), bought a collar and tags, and had him neutered. Our bichon, Daisy, reluctantly accepted him. 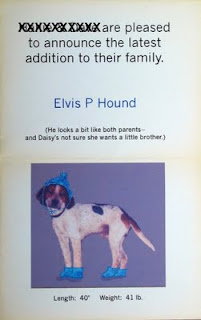 Elvis provided us with great stories. During the following year or so, he sang at the back door for his food, learned to retrieve a ball (not run from it), unlearned some of his survival skills, slept next to the bed (he had a terrible gas problem), claimed the Morris chair, rolled in fish guts, enjoyed rides in my old Cherokee so much he wanted to ride in everyone's car or get aboard their boat. When the neighbor who threatened to call the dog catcher opened the door to her new Mercedes to show off the interior, Elvis checked it out. He had ear infections, came home with the skin scraped from the pads of his feet, stole Halloween decorations, de-tasseled my husband's loafers, jumped into open car windows to nap on back seats, and had a positive reading on his heartworm test. (A definitive test was negative.) The alpha dogs bullied him, the neighbor's cats made him scream with terror, and he needed space to run--when he ran, he was beautiful; when he walked, he was stiff-legged and very slow.

Kind-hearted neighbors who had recently moved to the country adopted him; Elvis rode in my '87 Cherokee to his new home in an adjoining county (a sad trip for me). For seven years he and his buddy, Corky (a beagle with a bad leg), enjoyed an idyllic life on about forty acres. I got reports on his well-being and visited several times. On Saturday Elvis did not come home. On Sunday his family found him under the back deck; they saw a wound on his right hind leg and thought it was a snake bite. The vet said it was a .22; someone shot Elvis and the bullet shattered the bone. He is on antibiotics. If he makes it, his running days are over--he is probably close to ten years old.
I don't believe we'll ever know why he was shot or by whom. I do believe that, if God does not forget one of his sparrows, He surely knows what happens to His hounds.
We now have an SPCA; Elvis was my model for the Christmas cards above (2002 & 2003). I drew them, printed them, and sold them--all money went to the SPCA; I put him on their first T shirt design and he's still on their letterhead. The Lake Country SPCA has dedicated volunteers and little money; many dogs (not all are hunting dogs) and cats are waiting for adoption.
Posted by hw (hallie) farber at 5:23 PM 5 comments: 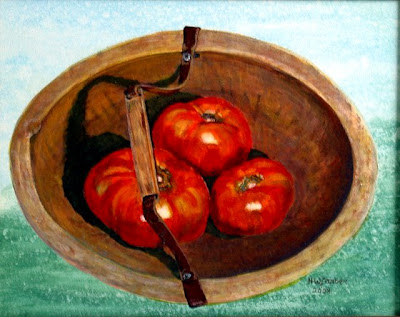 I borrowed this painting, Jabor's Tomatoes, acrylic 11x14, from the owners; it's hanging at the Holly Springs NC Cultural Center exhibit. The Art After Dark reception is Friday 6 to 8 p.m.; the exhibit will hang until the end of August.

In 2004/2005 our house was gutted and remodeled--from the dirt to the rafters. My husband stayed in our tiny guest house; I rented an apartment up the street and furnished it sparsely--two Morris chairs in the living room held my files; and, in the kitchen, I had a desk, one folding outdoor teak chair, a daylight lamp and a used three-foot tall step ladder (for changing bulbs). There was no TV and the cell phone was used infrequently--calls were too expensive at the time.

I placed three tomatoes (from a friend's garden) in a 75-cent leather-handled wooden bowl, set it on the chair, set up the lighting, put my palette on the desk and I sat atop the ladder--all night! I painted from 10 p.m. to 8 a.m., took a nap, and resumed painting. I completed it in about 24 hours; I relish the memory.

The bowl went with the painting (I insisted); when I saw it last it was filled with clementines--what a nice painting that would make.
Posted by hw (hallie) farber at 9:49 PM No comments:

End of a Dream 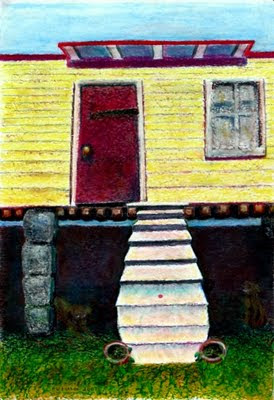 For years I had a recurring dream of climbing and climbing; access to the next level was always blocked--by a locked gate or a door.
This depicts one of those dreams--I am here.....often, oil pastel, 18x12. In this dream, upon reaching the landing, there is no way to open the door without knocking myself off. The "you-are-here" red dot on the stairs represents me. From there the perspective is of looking up at the roof--or looking down at the flowerpots; reaching for the knob left handprints on the door.
I have not had the dream since I finished the painting. I don't think the painting was the cure; I believe that by ignoring non-essentials--everyday housework, gardening (weeds are okay), etc.--art became a priority in my life and doors opened. It took many years to make this choice; now I claim my art time each day. Occasionally, the house gets cleaned and weeds get pulled.
This painting is part of my exhibit at the Holly Springs NC Cultural Center August 3 to 31.
Posted by hw (hallie) farber at 4:46 PM 2 comments: