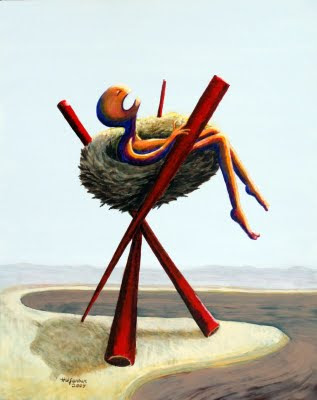 Entropy, acrylic, 24x18
In the early 80's, I read the book by Jeremy Rifkin--it stuck--and became the working title for this painting (partly inspired by a tank baffle I use to hold a bird bath). The painting was almost finished when ABC evening news reported on Kenya and its lack of rainfall--no rain for a year. The people, their livestock, and the elephants are dying. The report aired on the same day we discovered a major water leak under our house. Gallons of water had been wasted; the plumber said he worked in at least six inches of murky water. (We had heard what sounded like a motor running for several days and thought the problem was our new heat pump system--part of which is under the house. The noise was gushing water; our water pressure was a bit low but no other sign of a leak.)
I was upset not at paying a high water bill, but, at the unfairness of life. For a month I could not go into my workshop and face this painting without tears. I stayed in the house and worked with pastels or drew with pencils; I sent a small contribution to help Kenya. Yesterday I got back to the painting and finished today. Each night I ask that rain be sent to that area, and this painting will always remind me of thirsty people, livestock, and elephants.
I usually stick with humor--I couldn't find it this time.
Posted by hw (hallie) farber at 4:34 PM