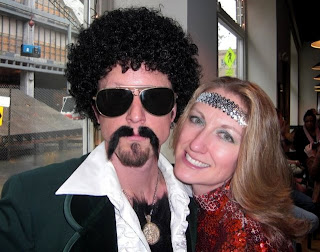 The title photo of Clarksville VA was taken from the Tisdale Bridge on the day of its dedication--June 8, 2005. It is actually two photos taken by Pam Speed; I stitched them together using Corel Photo/Paint.
Pam and Brian "Stork" Seal are a young couple and former neighbors. They have since moved to Roanoke--an exciting VA city where they attend festivities like "70's Cocktail Crawls" and are arting around at the new Taubman Museum (http://www.taubmanmuseum.org/). During the seventies, I saw costumes like these only on 14th Street in downtown Washington D.C. In the suburbs we were a bit more subdued.

(I changed the photo--some people have dial-up and it took too long to load.)
Posted by hw (hallie) farber at 2:11 PM