This is Not Art 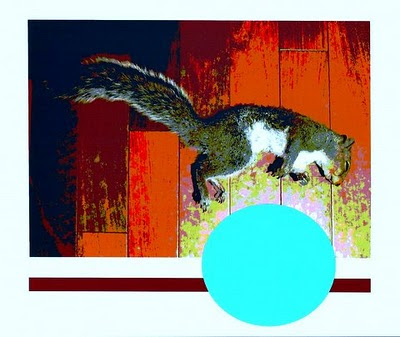 The Squirrel Jumped over the Moon

My dog Willie, a bichon, spent time alone in our fenced-in front yard yesterday. I was pleased because he won't stay out for long unless we accompany him--not fun in this unusually cold weather.

When I opened the door he came running in with what I thought was one of his toys--it wasn't. I told him to drop it--he did--on my living room floor--with a clumping sound. It was a frozen dead squirrel.

After locking Willie in the computer room, I jumped around (not high) saying "ew--ew--ew" and looked at the eyes--no blinking. The camera came out because my husband probably would not have believed it; after the photo shoot I picked the squirrel up by the tail and disposed of him.

His relatives have benefited from his demise; all my Christmas nuts have been thrown into the yard along with sunflower seeds, raisins, and pieces of apple. For a while I considered putting some old towels and socks outside to provide animal shelter--what would the neighbors think?

I had a pet squirrel named Whisko when I was young (and a pet calf named Pansy, and a bird, and a rabbit, and lots of cats & dogs). I believe all the animals (including snakes) are here for a purpose; they do much less harm than humans. Thankfully, the weather has warmed a bit.

After reading Kathy's blog "Is It Art?," this, I thought, was appropriate followup . (I suspect that inkblot is a drawing by Klimt--not a Rorschach test.)
Posted by hw (hallie) farber at 7:11 PM