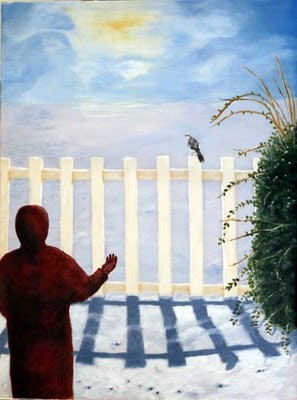 Talking to the Mockingbird, acrylic on linen, 24x18
"Listen to the Mockingbird" is a folk song from 1855 and probably the origin of my grandmother's name; then mine, and now my granddaughter's middle name. My mother sang the song often when she worked in the kitchen but she never sang the part about the mockingbird singing over Hallie's grave (she may not have known the actual lyrics). Wherever I've lived, there's been a mockingbird who shows up and waits for raisins--he/she sits on the fence and waits if there's snow--two weeks ago I stood on our walkway and showed the mockingbird that the raisins would be on the porch railing. (I wasn't walking in deep snow.)

The fence shadow has always caught my attention so a painting was in order. I thought I'd keep it simple--from the background I eliminated three houses, a 500-year old tree, a dogwood, a crepe myrtle, the street, several cars; I moved the horizontal fence boards to the back side of the fence, and brought a huge bush from the backyard to the front. (I don't know what the bush is; I took a sprig to a nursery once and was told that it's banned or illegal in VA. Luckily, the police have not noticed it, although it's at least 15' wide and 15' tall and constantly sends out shoots. It's the home to brown thrashers and cardinals, and all the birds sit on it after their baths--they bounce up and down and swing side to side.) Below is a photo of the actual scene; the sun is behind the huge tree, and my dog Willie is having a great time. 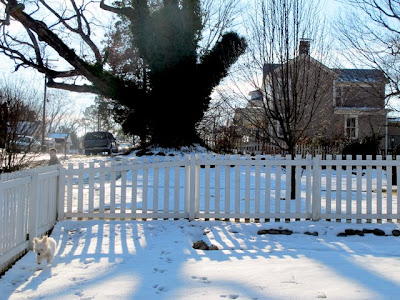 Talking to the Mockingbird is not quite finished--simple is not necessarily easy. I was really tempted to paint a first-grade round yellow sun with rays, and I'm considering mitten instead of glove!
Posted by hw (hallie) farber at 4:56 PM